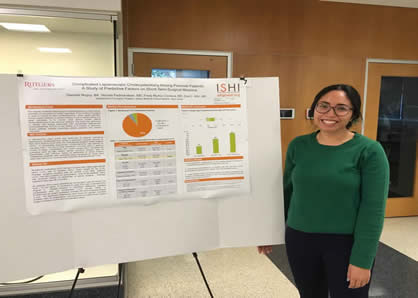 On October 23rd, 2019, Rutgers - NJMS Global Health hosted our 4th annual Global Health and Surgery Research Symposium to generate conversation, showcase student humanitarian and academic work in global health and global surgery. This year was thematically focused on refugee health, and featured speakers Kevin Lyons, PhD and Craig Spencer, MD MPH. Dr. Spencer is the Director of Global Health in Emergency Medicine at Columbia University Medical Center. In his capacity as a humanitarian physician, he coordinated the Doctors Without Borders national epidemiological response in Guinea during the Ebola outbreak. He is an advocate of forced migration and refugee health, working most recently on a medical search and rescue boat in the Meditarranean. He discussed his efforts and the plight of refugee populations in his talk on Wednesday evening. Dr. Lyons is the director of the Rutgers Business School Public Private Community Partnership Program based in New Brunswick, New Jersey. He is passionate about supply chain and medication and equipment logistics during disasters and emergencies. Dr. Lyons has worked extensively in Newark New Jersey, San Juan, Puerto Rico and sub-Saharan Africa and featured disaster supply chain concepts in his lecture. Following the well-attended speaker series, students presented research abstracts over dinner. Danielle Nogoy, NJMS medical student and student researcher at Rutgers - Global Surgery, was awarded 2nd place for the quality of her research by a panel of external judges. Congratulations, Danielle!

Finally, we would like to issue special heaps of thanks to our Program Coordinator, Marquiah Geiger, without whose strong effort, dedication, and skills this symposium would not be possible. Thank you, Ms. Geiger! You are the real MVP! 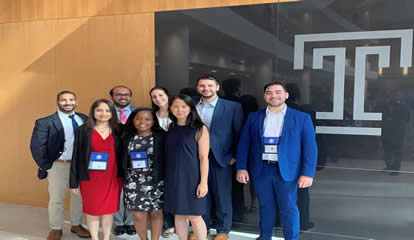 On July 27-28, 2019 the Rutgers - NJMS Center for Global Surgery team attended the Academic International Medicine World Congress 2019 in Philadelphia, Pennsylvania, which is a hub of medical education in the United States. Over the past few weeks, our students David Wassef, MS3 and Aastha Chokshi, MS3 prepared and practiced their oral presentations, with the feedback of the friendly and critical audience of the Ben Rush Summer Medical Student Journal Club. David's talk was, "Pilot Survey of Perceptions of West African Healthcare Workers of Short-Term Surgical Missions," and he was able to field a number of questions from his engaged audience. Aastha's talk, "Antibiotic Resistance in Developing Countries: A Meta-Analysis of Surgical Site Infections," was extremely well-received in a community with growing concern about antibiotic resistance in LMIC settings. 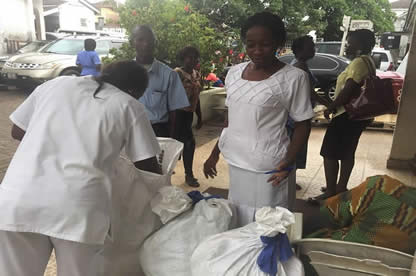 The photo depicting a woman opening white canvas bags was taken by Dr. Samba Jalloh in July 2019 as he distributes the most recent Rutgers NJMS - RECOVER shipment of surgical supplies including surgical gowns, drapes, blue towels, gloves, and disinfectant. Some of the supplies went to Princess Christian Maternity Hospital in Freetown, Sierra Leone, as well as the pediatric hospital on its compound. The supplies were well-received as they contained significant quantities of sterile surgical gloves, which the hospital had run out of several weeks prior. The remainder of the supplies will go to various hospitals in Freetown including the Police Hospital. We have debriefed with Dr. Jalloh and will continue to do so to ensure our shipments are tailored to the specific needs of the providers and patients in Freetown.

On June 19, 2019, RECOVER program at NJMS welcomes undergraduates student who are interested in volunteering with the RECOVER initiative! 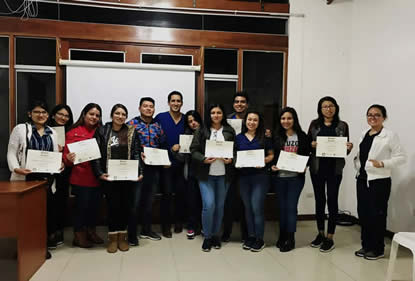 Dr. Lorena Lopez and Dr. Andrea are physicians that are local "Stop the Bleed" champions in Trujillo, Peru. On June 18, 2019 they taught a course for other physicians and medical students to teach basic bleeding control techniques. In May 2018, we taught Dr. Lopez the Bleeding Control course under the "train the trainer" methodology, whereby highly motivated local personnel with community involvement go on to provide targeted skills training that have the potential to save lives. We are also excited to see how many females are in this group and are now newly empowered by BCon training, as demonstrated by the certificates they are holding. We look forward to seeing how we can facilitate further skills training among our international partners and to see whether we can make any improvements to the course 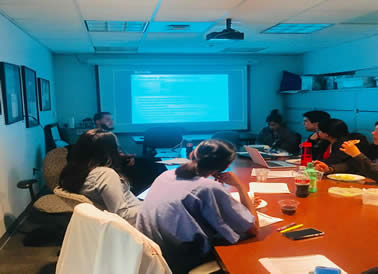 On Friday, June 14, 2019, over lunch, we heard Andrew Abdelmalek MS1, and former US Army veteran, discuss a study out of JAMA Surgery, "Use of Combat Casualty Care Data to Assess the US Military Trauma System During the Afghanistan and Iraq Conflicts, 2001-2017." This study reviewed changes to trauma practices during the Iraq and Afghanistan conflicts, which pertains to trauma surgical care in conflict zones, and demonstrated that increased use of tourniquets, blood transfusions, transport to surgery within 60 min lowered mortality by 44.2%. These findings have promising implications for Bleeding Control training in low-and-middleincome settings.This is our first medical student journal club of the summer and we hope it will kick off a successful and productive summer. 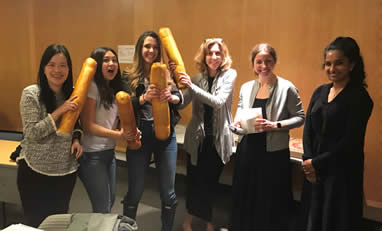 On April 13, 2019 ten nursing faculty and students within Rutgers - Global Health participated in a Rutgers - NJMS Bleeding Control training course ahead of their departure toXiamen, China, where they will be participating in global health outreach and educational activities under the leadership of Dr. Sue Willard, associate dean of Global Health and a core faculty member at the Rutgers Global Health Institute. The team quickly mastered BCon tenets and hemorrhage control techniques. Five of the nursing professionals and faculty members received additional support towards becoming course instructors, and expressed interest in teaching BCon courses in China and in their future visits to Tanzania, East Africa. China is the world's most populous country, with road traffic accidents as a leading cause of death among young people. BCon techniques have the potential to empower bystanders to intervene in bleeding events to help avert lives lost from injury. 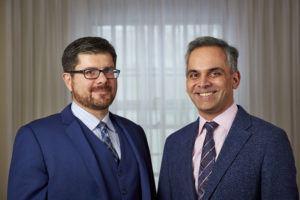 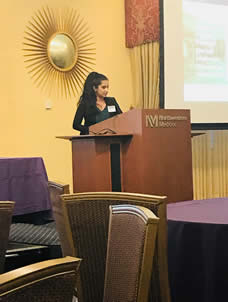 On March 8, 2019 Vennila Padmanaban, our current fellow, was a panelist at the Consortium of Universities for Global Health - Global Surgery Satellite Session at Northwestern Medicine in Chicago, Illinois. The session was entitled, "Impacting the Ecosystem of Global Surgery:Implementing Translatable Changes through Collaboration," and featured a panel of challenging ethical case scenarios.

Her clinical case was of a pediatric trauma requiring emergent operative intervention in rural Kabala, Sierra Leone. The panel provoked an engaging debate about challenges that providers face in the context of limited surgical capacity, concerns about standards of care, skills competencies with the absence of sub-specialists, and cultural sensitivity. The general consensus was that providers are obligated to weigh risks and benefits before electing to render care in austere settings, that they should be deeply mindful of the cultural environment, and that their foremosttenet should be "primum non nocere," or first, do no harm. 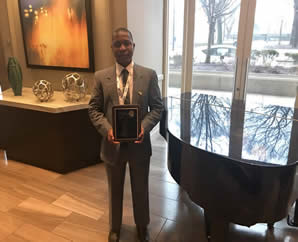 Dr. Samba Jalloh was awarded the Drs. Anvar and Pari Velji Young African Leader award on March 9th, 2019 in Chicago at the Consortium of Universities for Global Health for his service towards global health activities in Sierra Leone. The award includes a monetary stipend to support his travel to the United States and to apply towards ongoing global health activities in Kabala.

Dr. Samba Jalloh is a young West African physician who completed his medical training in Sierra Leone, a country emerged from an Ebola crisis that decimated its physician population. He was nominated by Rutgers NJMS Center for Global Surgery and is the awardee of the national 2019 Drs. Anvar and Pari Velji Young African Leader Award for global health excellence. He exemplified the criteria for award recipients as a devoted champion of improving healthcare outcomes in individuals in low-income settings through service, advocacy, education and research.

Dr. Jalloh has a mentee relationship with Dr. Sifri and Dr. Livingston, both trauma surgeons and faculty at Rutgers - New Jersey Medical School. He also has a close collaborative relationship with the surgical residents at Rutgers - NJMS. In particular, over the past several years, there has been continued knowledge exchange and longstanding communication over the RECOVER collaboration and in the capacity of field research in Freetown (urban capital of SL) and Kabala (rural, remote SL).

In addition, he has been an active participant in free surgical missions organized by the International Surgical Health Initiative and Saving Life Initiatives. Moreover, he is the founder and CEO of GS HEAD (Global Summit for Health Environment Agriculture and Development), which aims to boost socioeconomic status for young people; and he is a director/international liaison officer of a charity organization – PIN (Patient in Need).