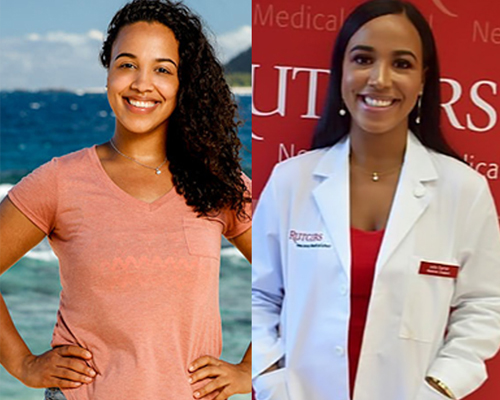 “To go from the couch to the island--that’s a challenge,” says Julia Carter, NJMS, class of 2022. “What you think you would do, and what you see done on TV, isn’t always applicable when you’re there trying to play the game.”

The island in question is in Fiji and the couch, one presumes, in Carter’s apartment. And the TV show, that’s “Survivor,” a series that’s been on the air almost as long as Julia Carter’s been alive.

Carter was born on a military base in Washington state and grew up in Hazleton, Pennsylvania. She received her B.S. from Penn State, but it was while Carter was a graduate student, studying Public Health at the University of Pittsburgh, that she took what was one of the most momentous (or craziest) decisions of her life.

Carter sat down at her kitchen table, logged onto the CBS web site, and auditioned for “Survivor.” That was 2016. Two years passed. And then, last April, a casting producer for the show called and asked if she was still interested.

“I had been planning to take the summer off, to travel before medical school,” she says. “So the timing aligned perfectly.” Carter flew out to L.A. for casting, made it, and soon found herself exiled to an island in the Pacific.

“I watched the show as a kid,” she says. “I didn’t really understand it, I was watching whatever was on. But after I lost my father, I remember watching and thinking, ‘Wow, look at those people surviving on an island’. It kind of became a way for me to escape, and it even gave me something to look at and idolize.”

Carter’s father struggled with heart disease after getting out of the military and becoming more sedentary. He died of a heart attack at the age of forty-two, when she was seven years old.

“Once I was old enough to understand what had happened--that his had been a preventable illness--it caused me a lot of frustration.” His death was one of her primary motivations to go to medical school. “I wanted to do anything I could to prevent other people from losing a loved one prematurely.”

Carter knew that Rutgers New Jersey Medical School was right for her the first time she saw it. “When I visited for my interview I could feel this sense of community. I knew that I would be supported here, that I would be able to flourish and make an impact. I wanted to be in an underserved area and in a diverse environment, and NJMS checked all the boxes. I’m about to finish my first year, and I couldn’t see myself any other place. I know I made the right decision.”

As for “Survivor,” although it wasn’t how Carter had planned to spend her summer, she did take some lessons from the experience. “The show forces you to discover your own resilience and find your own internal strength,” she says. “That’s helped me through some pretty challenging situations during my first year.”