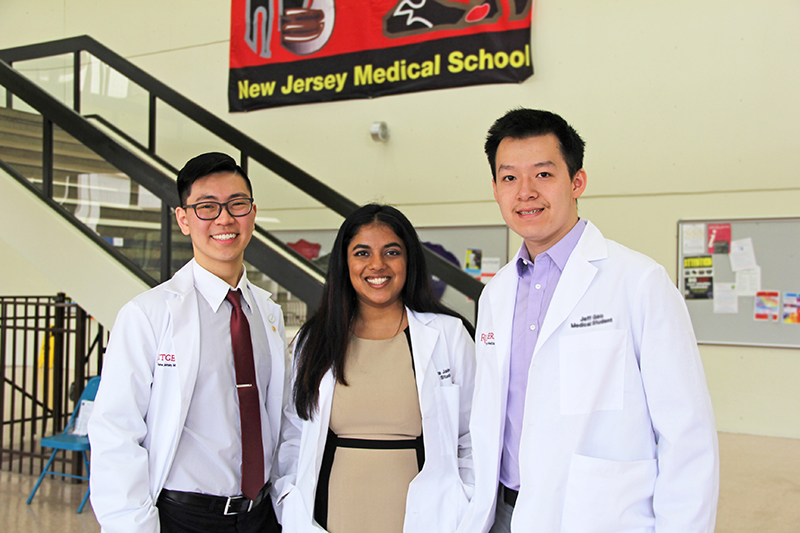 May is Asian American and Pacific Islander Heritage Month, and the Office of Diversity and Community Engagement at Rutgers New Jersey Medical School (NJMS) has teamed-up with the NJMS chapter of the Asian Pacific American Medical Students Association (APAMSA) to collaborate on a series of events to mark this celebratory designation.

“We’re all really excited,” says first-year student, Alex Lin, president of the APAMSA chapter. “These events help us raise awareness about health issues that disproportionately affect the Asian American and Pacific Islander communities. They’re also an opportunity for us to introduce our chapter to the wider NJMS community.”

“We’re a growing club,” adds Vanya Jain, also a first-year and co-vice president of the chapter. “There’s a large Asian population in New Jersey, so those of us at NJMS, we’re going to see Asian patients. We want to help medical students become more knowledgeable so that we can better serve all our patients.”

Founded in 1995, APAMSA is a national organization of medical and pre-medical students committed to addressing the unique health challenges of Asian American and Pacific Islander communities, and to helping health care workers better understand how to treat AA-PI patients in a culturally sensitive manner.

This month, the NJMS chapter of APAMSA will co-host the Asian American Pacific Islander Excellence Program, where, Lin explains, faculty and staff from University Hospital and NJMS, who identify as Asian Americans, will share their stories about promoting excellence at the school and in the hospital.

On May 6th, in collaboration with the National Alliance on Mental Illness, NJMS will host Mental Health and Cultural Competency in the AA-PI Community. “Mental illness is more of a cultural taboo in most Asian countries than in the West,” says Jain. “This discussion will be about the nuances of how to approach patients who don’t think of mental illness as a disease, or as something that can be treated. How do you approach them in a way that they can be open about whatever issues they’re having but not feel out of place, or judged, or misunderstood?”

Communication, Healthcare, and the AA-PI Community, to be held May 16th, will help educate students and faculty about issues specific to the Asian American and Pacific Islander community.

“Asian Americans and Pacific Islanders are disproportionately affected by chronic hepatitis B,” says Lin. “It’s one of the largest health disparities in the U.S.” According to the Centers for Disease Control, “Asian Americans and Pacific Islanders are 8-13 times more likely to develop liver cancer than other groups, primarily due to hepatitis B infection.” The liver cancer death rate for this population is 60% higher than that for Caucasians.

Both Lin, who grew up in Paramus, and Jain, who hails from Marlboro, say that they were drawn to APAMSA, in part, by their own life experiences. “The issues that we advocate for are ones that affect me, my family, and my community,” says Lin, who calls himself as a “very proud first-generation Taiwanese American.”

“I have parents and grandparents,” Jain says. “I want to see them, and people in my community, treated properly.” She adds, “I’m also Indian, so that gives me a bit of a different perspective. It’s important to realize that there are many different ethnicities within the Asian American population.”

Lin, Jain, and Co-Vice President Jeff Gao, also a first-year student, want to thank the NJMS Office for Diversity and Community Engagement for its all of its efforts to recognize Heritage Months throughout the year. All three are also keen to note that, independently, the NJMS chapter of APAMSA hosts social events, and addresses serious concerns, as well. Past activities include a bubble-tea making event and a group outing to see the movie “Crazy Rich Asians.”

The group’s primary focus, though, will always be service. “We are living in an increasingly multicultural world,” says Lin. “It’s important for us, as future physicians, to become more culturally competent.