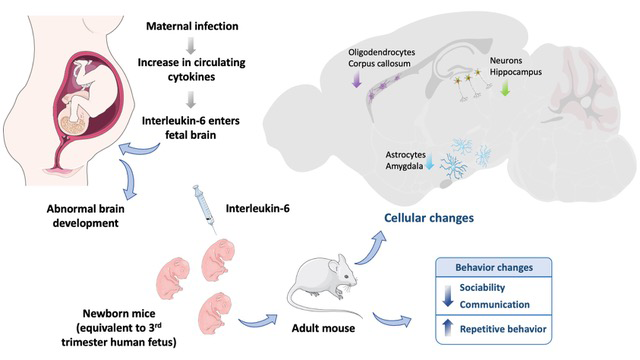 NEWARK, NJ—When a pregnant woman's immune system is fighting a bacterial or viral infection, it will produce cytokines, such as interleukin-6 (IL-6) that direct immune cells to attack the infectious agents. According to a new study from the New Jersey Medical School, Rutgers University in Newark, IL-6 also affects the stem cells and progenitors of the developing brain leading to abnormal behaviors associated with neurodevelopmental disorders such as autism, ADHD, Tourette disorder, depression, schizophrenia, and bipolar disorder.

As a prominent cytokine, IL-6 has been frequently associated with these neurodevelopmental disorders and is being considered as a biomarker for Autism Spectrum Disorder (ASD). The study is particularly relevant today as COVID-19 infections have been known to trigger the overproduction of cytokines in a "cytokine storm." Because IL-6 is greatly elevated during COVID-19 infections, concern is heightened for children of women ill with COVID-19 during pregnancy.

The study titled "Modestly Increasing Systemic Interleukin-6 Perinatally Disturbs Secondary Germinal Zone Neurogenesis and Gliogenesis and Produces Sociability Deficits", that was supported by grants from the New Jersey Governor's Council for Medical Research and Treatment of Autism, will be published in the next issue of Brain, Behavior and Immunitydue out in March, 2022.

Goal of Study: Link between Neurodevelopmental Disorders and IL-6
Previous studies demonstrated that infections during pregnancy do increase the risk of offspring developing neurodevelopmental disorders. Cytokines, small protein molecules involved in the inflammatory process, are produced by the immune system to fight infections. They also are linked to the developmental origins of psychiatric disorders. Their presence in pregnant women increase the risk of their children developing these disorders by a factor of two to four times.

This study sought to understand the role of the interleukin-6 (IL-6) cytokine in altering the trajectory of perinatal neural development.

These developmental changes elicited behavioral deficits in the mouse pups as they grew into adulthood. The mouse behaviors were reminiscent of several major symptoms seen in psychiatric disorders. IL-6 injected males were less social and showed deficits in communication. They were also less interested in interacting with female mice and had increased fear responses. Both males and females injected with IL-6 would sit and groom themselves obsessively, a recognized analogue of the repetitive behavior observed in autistic children.

The findings were quite significant: A short exposure to IL-6 alters the cellular composition of the brain, particularly in regions important for social behaviors that are implicated in several psychiatric disorders with developmental origins.

The Research Team at New Jersey Medical School of Rutgers University in Newark
The research was led by Dr. Fernando Janczur Velloso, a postdoctoral fellow of the Department of Pharmacology, Physiology & Neuroscience under the guidance of professor Dr. Steven W. Levison. Other team members included Anna Wadhwa, a recent graduate of NJIT and Dr. Ioana Carcea, assistant professor, also in the Department of Pharmacology, Physiology & Neuroscience. Ozlem Gunal, an assistant professor in the Department of Psychiatry and Ekta Kumari, a graduate of the Rutgers School of Biomedical Sciences, who is now a Staff Scientist, at Incyte also contributed.

This Is What Clinical Research Excellence Looks Like at the New Jersey Medical School
Rutgers New Jersey Medical School is home to some of the most advanced biomedical research facilities around. The efforts of our forward-thinking scientists, who are respected international leaders in their respective fields, hold the promise of tomorrow's new treatments and drugs that have the potential to either save or improve the lives of the infirmed.